On Richard Sherman, and Us

Posted by statomattic on January 20, 2014
Posted in: Uncategorized. 4 Comments 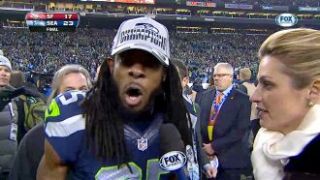 So, let’s get this out of the way first: I in no way approve of Richard Sherman’s behavior after he tipped the pass away from Michael Crabtree in the closing moments of the NFC Championship game. His antics were boorish, arrogant, over-the-top, and every parent and coach should highlight them and Sherman’s post-game interview on the field as a perfect example of how not to be a graceful winner.

You’re probably guessing there’s a “but” here. You’re correct, and it has nothing to do with where Sherman patted Crabtree after getting the better of him.

The “but” is that our collective reaction to Sherman is a much more important and sad commentary on the present state of our culture than was Sherman’s behavior itself. Predictably, within seconds after Sherman’s impromptu WWE audition with Erin Andrews, social media feeds across the nation lit up with posts and tweets decrying his lack of class and his poor sportsmanship, rooting for “aw shucks” amiable good ol’ boy next door Peyton Manning to torch him in the Super Bowl, and the like. Sherman will become a pariah for the next two weeks, after which he will win or lose the Super Bowl and mainstream, conventional wisdom America will forget about him until at least next fall and move on to its next pariah of manufactured indignation.

Yet, how many of the 106 men on the field Sunday night you rooted for have taken illicit substances to gain an edge, have serially cheated on their wives, have fathered many multiple children they’ve never met with many multiple women who are not their wives, have been arrested for DUI, have been arrested in incidents involving a firearm, have been accused of assault (sexual or otherwise) with more than minimal evidence… Yeah, it’s uncomfortable to think about this stuff, but you get the idea. And that’s not to say that it’s wrong to root for anyone who isn’t perfect, or that people can’t make mistakes and redeem themselves, or that you can’t separate the athlete on the field from a personal role model off it, but nonetheless…

I’m no fan of the saying “at least he didn’t kill somebody,” but honestly and sadly, in light of the events of the past year in the NFL, yes, at least Richard Sherman didn’t kill somebody. Here’s what else he didn’t do: He didn’t make any threats. He didn’t spit. He didn’t make any vulgar gestures. In a bigger upset than it will be if the Seahawks win the Super Bowl, he didn’t even utter a single swear that FOX would have been unable to bleep in time.

Sherman showed a lack of class and it’s worth pointing that out, telling our children not to act like that, and getting mildly annoyed at it. But is it worth the ink and gigabytes it’s getting, or will continue to get between now and “The Big Game?” In a more innocent, tamer world, perhaps. But this is a world where real-life criminals and rapists and animal abusers are given a ceremonial slap on the wrist in the court of public opinion for a few weeks or months, only to have throngs of fans cheering wildly for them once they return to action as if nothing ever happened. Sadly, in the Internet-shortened memories of the masses, maybe nothing ever did.

The assaults and the DUIs and the drugs deserve to set the social media world on fire, but they don’t. That’s partially because we’ve become numb to it, but also largely because less comfortable conversations would result. Poor sportsmanship may be a relatively trivial offense, but it’s also less controversial to talk about and an easy target, so hey, let’s pile on Richard Sherman since he’s the worst person ever until we forget about him and there will be a new worst person ever.

One only need to look to our nation’s capital and many of the people we elect to represent us to see the real-life consequences of our superficial fixation on words and mannerisms, as opposed to concrete actions. Words can easily fool us when we’d rather not face uncomfortable truths. And for that, we are the fools.