Six weeks from right now, the pre-race pasta dinner will be settling in my stomach and I’ll be heading west with my wife and girls to our room for the night, about a half-hour’s drive from the Boston Marathon starting line in Hopkinton.

I typically don’t get nerves and butterflies building this far in advance of a race – usually even for full marathons the madness is confined to the final two weeks of tapering – but this race is unique. I’m already feeling them, which is great in a sense but also means it will be a long six weeks. Accuweather’s extended outlook is available for 45 days, which means it’s now available for race day! Which is entirely ridiculous because the 45-day outlook is obviously worth about as much as throwing darts, but because it’s fun… April 18 in Boston is currently slated for partial sunshine and a high of 51 degrees. Chilly, but not horribly so. All of that probably means the day is destined for 80 degrees and rain. But enough about that…

Aiding my anticipation, Friday’s mail included two welcome packages. First, my race day jersey for Dana-Farber arrived! It is a sight to see. 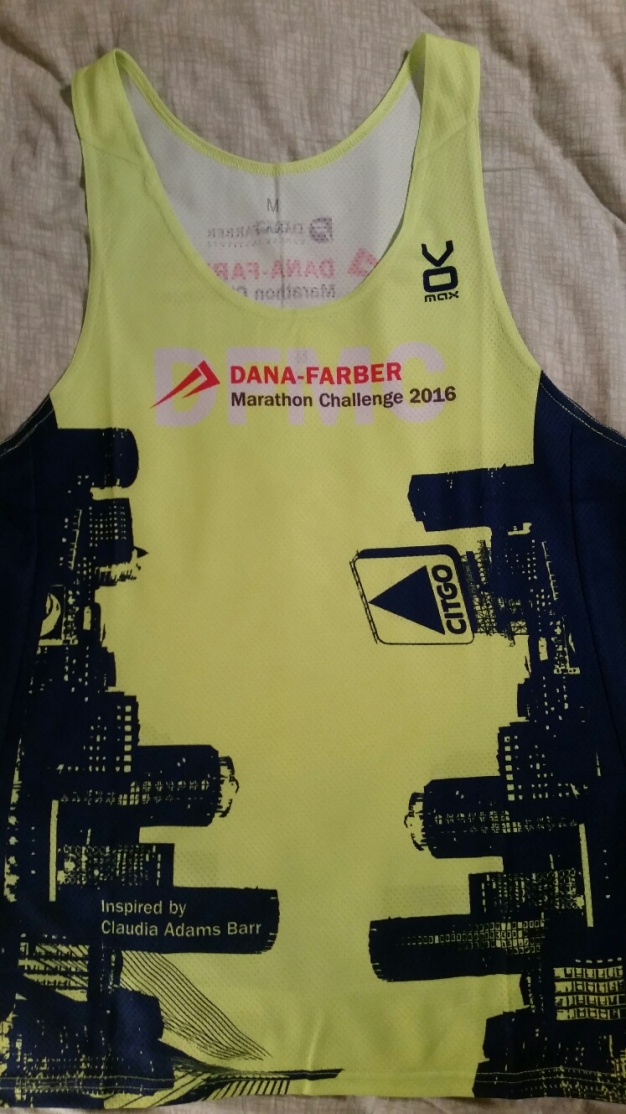 For some reason the Boston skyline shows up as black in the photo, but it’s really blue on the shirt. The yellow is bright. The photo doesn’t do it justice. Rest assured that even if you don’t know me, you will see me coming. They might see me coming from Nova Scotia. And it’s somewhat of a campy dream come true that I will get the chance to run by the Citgo sign while wearing the Citgo sign. Growing up a Red Sox fan, the Citgo sign which appeared lit up in neon during every televised home game became a symbol of urban excitement in my mind throughout my childhood. 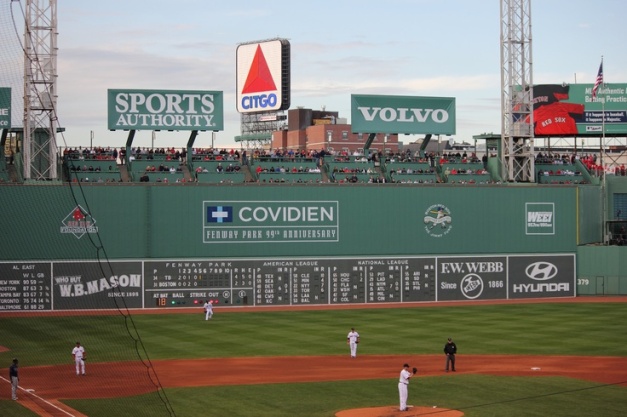 One of my favorite anecdotes about the Citgo sign is that former Blue Jays slugger Joe Carter used to say he’d see the sign and read “See it go.” Which made sense because Carter was a Red Sox nemesis, launching many a home run over the wall in the eighties and nineties.

As exciting as it was to see the singlet, I can’t use it yet (well I suppose I theoretically could, but it’s my uniform. Does David Ortiz go to Cumberland Farms wearing his Red Sox jersey? I mean, really now). Fortunately, the other package I received contained something I can wear now.

That piece of footwear you see above is a pair of Oofos recovery shoes. I received a surprise email last week from the Dana-Farber crew, informing us that as a show of appreciation for the work we’re doing in the fight against cancer, Oofos was giving every member of this year’s Dana-Farber Boston Marathon team a free pair of its shoes! All we had to do was select a style and size, and Oofos dropped a pair in the mail to us the very next day.

These are recovery shoes because they are intended to be used by runners who are recovering from a long run, but they really could be used by anybody who’d like a soothing treat for their feet. I wore them for the first time yesterday after my Saturday long run, and let me tell you, they are indeed a treat. Extremely soft and well-cushioned. And they seem to be durable enough that you can wear them just about anywhere. They strike me as a great shoe to take traveling. At any rate, I will be making great use of these over the next six weeks as I prepare for Boston, and they will most definitely be the first thing I slip on my feet after slipping out of my race day Sauconys on Marathon Monday.

I am super thankful to Oofos for their generous gift to us running for Dana-Farber, and also thankful to the staff at Dana-Farber for doing a bang-up job organizing a great charity team. And oh, as I am running for charity, I may as well include a link to my own personal fundraising page. If you are so inclined to donate to the Dana-Farber Cancer Institute and all the wonderful work it does, please consider doing so on my page. 100% of your tax-deductible donation goes directly to cancer research,  so you may give with confidence.

To sum up, I have a yellow jersey, a new pair of shoes, I’m feeling good, and am increasingly pumped with each passing day for Boston. See you next week.

6 comments on “Gearing Up”