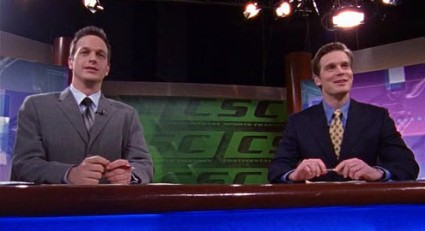 A few months ago, I was the last one awake in the house one late evening and had nothing else pressing to do, so I decided to browse Hulu. I stumbled upon reruns of Sports Night, and immediately with excitement chose an episode from midway through its two-season run. Once upon a time – that time happening to coincide with my junior and senior years of college – Sports Night was considered as smart and as cutting edge as network TV could get. Aaron Sorkin’s early-career creation featured witty, quick-paced dialogue and several actors who would go on to long, successful careers – plus a Robert Guillaume nearing the end of his to lend gravitas to the cast. As an aspiring sportscaster, the sports director of my college radio station, and an intern at WABC-TV in New York at the time, I loved Sports Night. So it was with great excitement I tuned to it on Hulu, only to be stunned. I discovered that what seemed so cutting edge in 1999, had aged shockingly poorly. The dialogue which once seemed so witty and fresh now felt forced. I could only stomach half an episode before shutting it off. How had a show gone from great to unwatchable in less than two decades when mediocrities such as “Home Improvement” remain eminently enjoyable if caught in reruns? I thought about it for a few minutes, and then, what had initially shocked me suddenly made perfect sense.

“Sports Night” is no longer watchable in 2018, because it depicts a fleeting American media landscape which has become an anachronism. To anyone under the age of roughly 28, I suspect the world it depicts is borderline unrecognizable. This realization immediately made perfect sense to me, because that very changing of the sports and media landscape is the same thing that led me to depart that world and seek a career change.

If you are a follower of this blog, you know it’s been dormant for the better part of a year. I feel like I owe you an explanation, and so, I am writing this entry for you.

In the past year, I had the chance to do a lot of reading. I read some very good books. One concept that struck me in the books that I read was that of change, and this concept is one that took me half a lifetime to grasp. A lot of people probably never grasp it. Specifically, there’s a tendency among human beings to decide either “change is bad” or “change is good,” and to identify yourself in one of the two camps, either a traditionalist or a radical. Intrinsically, this fallacy never quite made sense to me. Myself, I never quite fit in either camp. In many ways I am conservative and a traditionalist, yet I am also forward-looking and unafraid of change when it is warranted. In the modern-day American political climate, the very notions of conservatism and radicalism have been turned on their ears as in many areas (I am thinking largely fiscally here, but also culturally) those known as “progressives” are most protective of policies of the past and entrenched power, while the “conservatives” are the actual radicals.

Anyway, my realization on change is this: Change is by definition neither bad nor good. Change is a constant. Change is reality. An endearing character flaw in human nature is the tendency to, when we first find something, assume that the way we found it was its natural, intended state. This illusion leads us to resist change as somehow upsetting the natural order of things. However, this gets it exactly backwards. Change itself is the natural order of things. When you were born, your parents were probably very different people from who they had been a decade prior. As a young child, you didn’t realize this. We get lulled into thinking the parents we know as preschoolers will remain more or less the same forever. Of course, the reality is that our parents are constantly changing just as we are ourselves. If you move into a neighborhood, the state in which you initially find that neighborhood is not static but in the midst of a continuous process of change. Someone who’s lived there for a decade is bemoaning the loss of what it once was, while someone who moves in a decade after you will see that new state as the illusory ideal. This does not mean we should embrace all change or resist it, but rather we should expect it to occur as the natural order of the universe and evaluate each change on its own merits, with as little sentimentality as possible.

The world of sports media and sports statistics and, yes, “Sports Night,” which I entered as a newly-minted college graduate at the turn of the millennium was one I had come to believe was an intended state when, in reality, it was merely a fleeting state amidst constant change. By roughly 2005, the sports media and analytics landscapes had already become significantly different from what they were in 2000. By 2015, they were essentially unrecognizable. I don’t care to provide a lot of additional detail here because I have plenty of friends and former colleagues who still work in sports and whom I respect, and I don’t want any of those people to think I am bashing the industry. Though I do have my stark philosophical differences with the current states of both sports analytics and the sports media, that’s not my intent. If you want to discuss it with me one of these days, I’d be happy to meet you for coffee at any Starbucks where you can even use the restroom now without ordering a coffee.

My intent is merely to explain that, by early last year, I no longer enjoyed working in the sports world and no longer saw a future for myself in it. I came to realize that the cynical, stressed, unhappy person I was at work and in the first couple of hours after work each day was a person I increasingly didn’t like very much, and I liked myself much better in almost all other settings. This wasn’t healthy, and I knew that in order to look out for my own future and my ability to support my family long term, I had to make the leap and quit. It was the only viable option and, inspired by game theory much like my coaching hero Bill Belichick, I saw that the true risk would come not by making the move too early, but by waiting until it suddenly became too late.
The career transition took longer than I hoped it would, and during that time I didn’t feel much like blogging. I have always seen my career as a central aspect of my identity, and stripped of that identity, I didn’t much want to share my voice. I wanted to get everything in order first. As I write now, everything is back in order and I am ready to share my voice again. I have been working for the past month in a new role for a terrific software company where I am happy, challenged, and believe I could stay and thrive for a long time.

So, you’re going to see more blogging from me again. I am running the Chicago Marathon this fall (more exciting stuff on that to come very soon), and this little spot on the web will be back to its regularly-scheduled programming. Though I am glad to be back, I really never left you all. I just retreated into my bunker for a while. And while I may have said goodbye to the world of “Sports Night,” I will never say goodbye to my beloved world of sports and sports fandom.